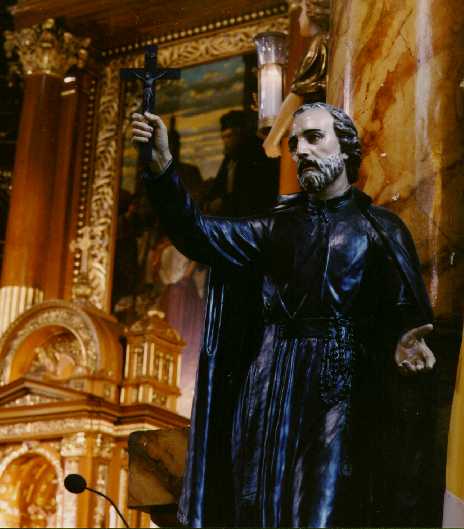 Andrew Bobola was born in 1591 in Strachocin, southern Poland, to a family that was part of the lesser nobility and known for its devotion to the Catholic church. At fifteen, he studied at the Jesuit school in Braniewo in northern Poland and entered the novitiate at the age of twenty. After pronouncing his vows two years later, he studied philosophy and theology at the famous Vilnius Academy and was ordained in 1622.

Fr Bobola’s first assignment after his ordination was as pastor of the Jesuit church in Nesvizh. During his years there he converted many and gave missions in the suburbs. He returned to Vilnius in 1624 to St Casimir’s church and remained there for sixteen years. He was an outstanding preacher and was in charge of the various sodalities of our Lady. From these sodalities, Fr Bobola recruited assistants who helped him visit prisoners and the poor, and assisted him in teaching catechism to children. He and his assistants worked tirelessly and zealously during two outbreaks of the dreaded plague in Vilnius and many priests and sodalists fell victim.

In 1630 Fr Bobola moved to Bobruisk in eastern Poland where the majority of the people were Orthodox and many Catholics had given up their faith partly because they did not have their own priests and churches. Fr Bobola built a church for them and offered those who wanted to, an opportunity to return to the Catholic faith. For the next twenty-two years, he worked relentlessly in various towns and cities serving as preacher and teacher until poor health restricted his work and he returned to Vilnius. 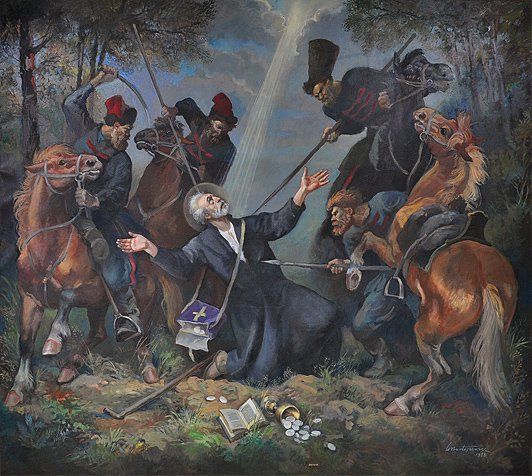 The agreement of the union of Brest-Litovsk signed in 1596 had attempted to resolve the conflict between the Orthodox and Catholic churches so they could coexist in peace. Unfortunately some Orthodox joined forces with the Cossacks whose infamous leader Bogdan Chmielnicki did all he could to vitiate the union and expel the Catholics. He succeeded and a large part of White Russia ( today’s Belarus) came under his control by 1655.

Fr Bobola was in Vilnius when the Tzar’s army marched in and sacked the city in 1655, when Poland and Russia were at war. As he was no able to continue his ministry in Vilnius, Fr Bobola went to Pinsk to help Catholics there keep their faith and to encourage them to remain steadfast even when persecuted by the Cossacks. Fr Bobola succeeded in getting two entire villages to return to the Catholic faith through his preaching. He was hated by his enemies who nicknamed him “ soul-hunter,” and adults urged street urchins to throw mud and stones at him whenever he walked through the streets. Fr Bobola remained undeterred and continued with God’s work although he sensed his martyrdom was coming.

When the Cossacks occupied Pinsk two years later in 1657, the Poles and Catholics fled to the forests. On May 16, the Cossacks attacked Janow and massacred both Catholics and Jews. Fr Bobola was in nearby Peredil at that time but some people told the Cossacks where to find him. When the Cossacks failed to persuade Fr Bobola to renounce his religion and to embrace the Orthodox faith, they threatened him with painful torture. When they knew Fr Bobola would never apostatize, the Cossacks stripped him, tied him to a hedge and whipped him until blood flowed. They mocked his faith and placed a crown of twigs on his head and then dragged him to the place of execution, a butcher’s shop. When he still refused to apostatize, the Cossacks placed him on the butcher’s table, tore of the skin from his chest and back and cut holes in the palms of his hands. For two hours they made him undergo one of the most cruel tortures before they finally jabbed a butcher’s awl into his chest near the heart. They then strung him up by his feet and killed him with a sabre blow.

A band of Poles arrived at Janow just as Fr Bobola died, in a vain attempt to rescue him. They took his body back to Pinsk where they placed it in the crypt beneath the Jesuit church. His body was taken to Moscow in 1808 and returned to Poland after his canonization in 1938.