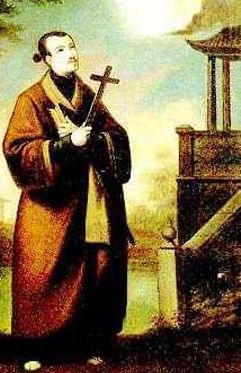 Fr Pacheco was the most experienced Jesuit who died a martyr during the Great Persecution in Japan between 1617 and 1632. At the time of his arrest, he was provincial superior of the Jesuits and apostolate administrator of the diocese and his imprisonment was a serious loss to the Christian community struggling to survive the persecution.

Fr Pacheco was born in Ponte di Lima, near Braga, Portugal. As a youth he heard of the exploits of missionaries in Japan and dreamed of imitating them. While at the Jesuit school in Lisbon, he also watched the annual departure of the Jesuit missionaries and this further strengthened his resolve to be one and thus he decided to join the Society in 1585. His request to go to the missions was only granted seven years later and his first stop was Goa, India where he continued his studies. He then went on to Macau to further continue his studies before being ordained.

Fr Pacheco finally set forth for Japan in 1604 and spent four years in the capital of Osaka, Miyako (today’s Kyoto) before taking up his next appointment as head of the Jesuit college in Macau. In 1614, he returned to Japan and became vicar general to Bishop Luis de Cerqueira, and was based in Nagasaki until the promulgation of the shogun’s decree in 1614 banishing all foreign missionaries and forbidding Japanese Christians to practice their religion. Fr Pacheco’s exile in Macau was a short one as he returned secretly to Japan the following year, disguised as a merchant, and took up missionary work at Takaku and the islands of Amakusa and Kani. During those years of fierce persecution he sadly saw thousands of Christians give up their religion under governmental pressure and fear of torture. He also witnessed the terrible deaths of his brother Jesuits and hundreds of Christians who remained steadfast in their faith, though it meant beheading or death by slow fire. Fr Pacheco knew that the longer he remained in Japan the closer was his martyrdom.

Following his appointment as the Jesuits’ provincial superior, Fr Pacheco moved his residence from Nagasaki to the seaport of Kuchinotsu in Arima which had better security and better contact with the Jesuits in Japan. The search for Jesuit missionaries was intensified when more spies were recruited by Shogun Iyemitsu. Fr Pacheco was betrayed by his former host, an apostate who because of the reward money and hoping to gain favour with the district governor revealed where he was staying. With 200 soldiers surrounding the house Fr Pacheco and two of his catechists, Paul Kinsuke and Peter Kinsei were arrested with two others staying in the next house. The Jesuits, the catechists, their hosts and families were all arrested and placed in a dungeon in Shimabara where they had to endure the damp and cold winter. Within a few days, Fr John Baptist Zola and his catechist, Vincent Kaun were added to their number.

While in prison, Fr Pacheco admitted the four catechists into the Society and transformed his group of prisoners, including the lay persons into a quasi-religious community with set time for rising, prayer, meditation, fasting and doing penance to prepare and strengthen them for the martyrdom to come. Their greatest sorrow was their inability to celebrate Mass, recite the breviary and recite the rosary as all these had been taken away from them. Finally on June 20, 1626, the prisoners were brought to Nagasaki where two other prisoners, Fr Balthazar de Torres, SJ and his catechist, Michael Too were included. The final number was nine Jesuits and nine Christians and all were escorted to the Martyrs’ Hill where the executions were to take place. The Jesuits rejoiced in seeing each other and embraced for the last time. They were the first to die. The government kept the Christians aside hoping that some would apostatize but watching the martyrs die only strengthened their faith. They were kept in a prison in Nagasaki, determined to die for Christ. They were martyred on July 12, 1626.

Fr Pacheco and his eight Jesuit companions, together with the nine Christians were included among the 205 martyrs beatified by Pope Pius IX on May 7, 1867.