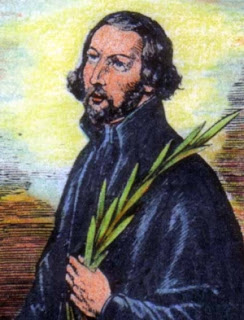 Thomas Holland, an Englishman was born in Sutton, near Prescot, in Lancashire. In his youth, he spent six years at the English college at Saint-Omer in Flanders and later in 1621, at the English college in Valladolid, Spain. It was here as a seminarian at St Alban’s that Thomas was chosen to extend a welcome in Latin to Prince Charles during his visit to Madrid in 1623. Thomas returned to Flanders in 1624 and entered the Jesuit novitiate at Watten. He continued with his theological studies at Liege where he was ordained.

Fr Holland returned to Saint-Omer to be the seminarians’ spiritual director and was nicknamed the “Library of Piety” because of his vast knowledge of the ascetical life. He was assigned to the English mission as his superiors hoped that his poor health would improve in his native air. However his health worsened because of the difficult conditions he was living in because priest-hunters were eagerly seeking priests for the reward offered for their whereabouts or capture. Fr Holland went about in disguises, taking on the names of Saunderson and Hammond as aliases and because he was fluent in French, Flemish and Spanish, he was able to pass off as a foreigner. Despite his poor health, Fr Holland did not allow it to interfere with his ministry which he carried out at night or in the early morning for seven years.

Fr Holland was arrested on suspicion of being a priest on Oct 4, 1642 after returning from a sick call and was detained for questioning at New Prison in London for two weeks. He was later sent to Newgate. During his confinement, Fr Holland hardly slept, often spending the night praying secretly. At his trial in Old Bailey on December 4, 1642, four witnesses claimed he was a Catholic priest but no proof was produced to confirm their testimony. However he was found guilty by the jury when he refused to swear that he was not a Catholic priest. When Fr Holland received his death sentence, he said: “Thanks be to God.” And later back at his cell he invited the Catholics there to join him in singing the Te Deum, the great hymn of thanksgiving. 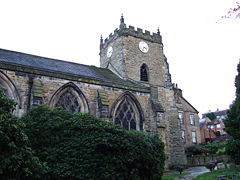 With two days to live, many visitors came and requested Fr Holland to remember their intentions and although the French ambassador offered to intervene with the King, Fr Holland preferred martyrdom to freedom. On the Sunday before his execution, his Capuchin friends brought him the articles for Mass which he celebrated in his cell that day and also on early Monday morning.

Fr Holland was dragged to Tyburn at mid-morning of the 12th and seeing a crowd had gathered in silence, he spoke: “I have been brought here to die a traitor, a priest and a Jesuit; but in truth none of these things has been proved.” Then mounting the cart, he placed the noose about his neck and told the people that he was truly a priest and a Jesuit and that he pardoned the judge and jury that had condemned him.. He recited his acts of faith, hope, charity and contrition and then prayed for King Charles I and the nation “for whose prosperity and conversion to the Catholic faith, if I had as many lives as there are hairs on my head, drops of water in the ocean, or stars in the firmament, I would most willingly sacrifice them all.” These words brought cheers from the crowd. He then forgave his executioner for what he is about to do and gave him the few coins he still had in his pocket.

With eyes closed in prayer, Fr Holland looked at a priest in the crowd and received absolution. After he was hanged, his body was beheaded and quartered and exposed on London Bridge. Fr Holland was only forty-two years of age and a Jesuit for eighteen years. Pope Pius XI beatified him on December 15, 1929.