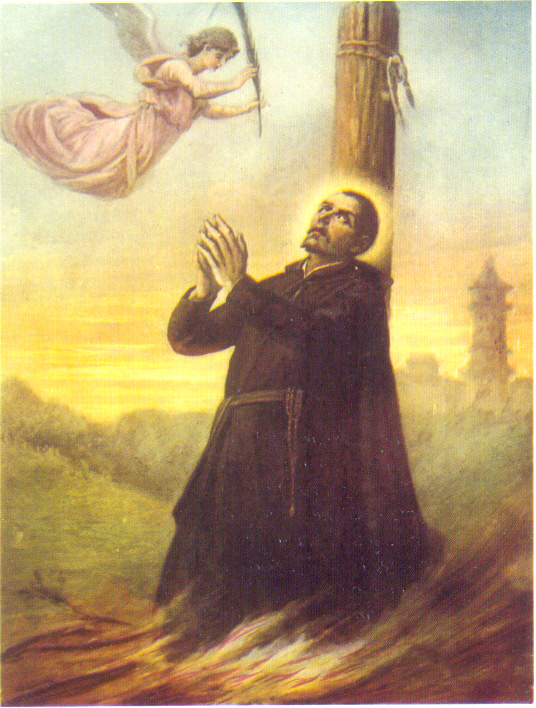 Jerome de Angelis was born in Castrogiovanni (today’s Enna) in Sicily. He studied law in Palermo but gave it up as a 19-year old student after attending the Spiritual Exercises of St Ignatius and joined the Society in Messina instead. Nine years later when he was about to finish his theology, he was assigned to the Japanese mission and he immediately set out for Lisbon and the voyage to the Indies. He arrived in Genoa in Dec 1595 and met Fr Charles Spinola and together they sailed for the Indies in April 1596. Due to a series of unfortunate and harrowing incidents that took them back and forth across the Atlantic Ocean and ultimately back to Lisbon, they only arrived in Nagasaki, Japan, six years later in 1602 after Jerome was ordained as a priest in Mar 1599.

On his arrival, Fr De Angelis was sent to Fushimi in central Japan and then to Sunpu (now Shizuoka) to establish a Jesuit residence and a centre for missionary activity. He was also responsible for setting up the Jesuit residence and the missionary centre in Edo (today’s Toyko). He spent the next twelve years on the mission in central Japan before the edict of 1614 under Shogun Iyeyasu brought an end to the Catholic missions in Japan and banished all foreign missionaries from the land. While many of his Jesuit brethren were forced into exile to Macau or Manila, Fr De Angelis went into hiding in Nagasaki and continued to labour among the Japanese Christians, disguising himself as a merchant to minister to his flock. It was during this undercover work that he met Simon Yempo, a catechist.

Simon Yempo was born in Nozu, Kyushu and as a young boy he entered a Buddhist monastery. He became a Christian at 16 when the head bonze became a Christian. At 18, he joined the Jesuit seminary as he was hoping to become a catechist and to work with the Jesuits. Simon was an invaluable addition to the missionary as he had firsthand knowledge of Buddhism and its monastic traditions which he could refer to when explaining the truths of Catholicism to his fellow Japanese. He initially went into exile with the Jesuits, but sometime later he returned to Japan and offered his talents to Fr De Angelis.

Fr De Angelis and Simon followed the Christians toYeso Island (today’s Hokkaido) which was further away from the central government and the Christian communities could live in peace and without of persecution. Fr De Angelis was the first missionary to preach Christianity in the northernmost part of Honshu Island and the first European to set foot on Yeso where they remained for four years until 1622 when he was instructed by his superior to return to Edo as superior of the Jesuits working in that city and the surrounding district. He again went underground to carry out his ministry at night assisted by Simon who had by then been accepted as a Jesuit brother in the Society.

In Nov 1623 a dissatisfied Christian informed the authorities where Fr De Angelis and Bro Yempo were staying but they were not in when the soldiers raided the home and arrested the owner and apprehended another forty seven Christians in the roundup. When Fr De Angelis heard this news, he decided to surrender himself so that his host could be released. Bro Yempo went along as he did not want to be separated from Fr De Angelis and both gave themselves up to the authorities although the host was unfortunately not released.

The two were sent to different prisons; Fr De Angelis preached to his jailers and converted all eight of them while Bro Yempo preached to his jailers and to other pagan prisoners and converted forty of them. The order for them to be executed by slow fire came on Dec 4 and all fifty prisoners were taken to a plain near Yedo. The forty seven Christians were first to go and while they were dying, Fr De Angelis encouraged them to persevere in their love for God and of the joy of eternal life with God waiting for them. As each of the martyrs bowed his or her head in death, Fr De Angelis raised his hand in absolution. Then it was time for him, Bro Yempo and the Franciscan Francis Galvez turn to go. As the flames wrapped round their bodies, Fr De Angelis turned his stake into a pulpit. In a loud voice he told his spectators that he and his companions were dying for the Christian religion and asked the Catholics in the crowd to remain faithful to God. Soon the flames engulfed them and the three religious, standing immobile, offered themselves courageously to God.

The forty seven Christians were not included in the beatification because of insufficient information about them, although all are worthy of being called “blessed.” Only the three religious were beatified by Pope Pius XI in 1867.