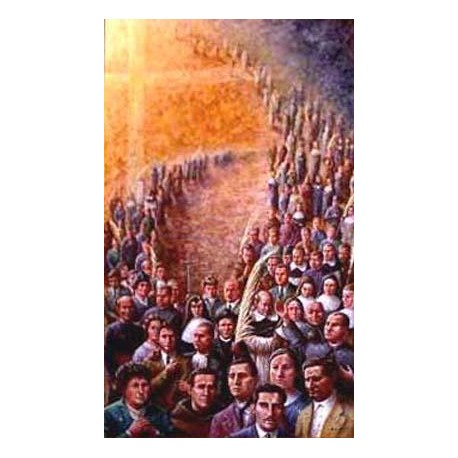 Fr Peter Dias was one of the Jesuits from Portugal who volunteered his services during Fr Ignatius de Azevedo’s visit to Portugal in 1570 to seek Jesuits to join him for the Brazil mission. He was born in Arruda dos Vinhos, near Lisbon, Portugal and entered the Society on March 28, 1548. After his ordination he was procurator at the Jesuit college in Coimbra where he also taught moral theology.

Fr Dias was one of the seventy over Jesuits missionaries who set sail in three vessels for the Brazil mission. He was put in charge of some twenty Jesuits aboard the vessel carrying Dom Luis de Vasconcelos, the new governor, on his way to Brazil. The other two vessels were headed by Fr Azevedo and the third had Fr Francis de Castro. When the flotilla stopped at Funchal on the island of Madeira, off the African coast, all the ships stayed behind except the Santiago, which carried Fr Azevedo and his group. The ship’s captain was eager to do some trading in the Canary Islands but when in sight of Santa Cruz de la Palma, Fr Azevedo’s ship was attacked by Huguenot pirates and he and thirty –nine Jesuits were martyred.

Fr Dias received news of the martyrdom of his forty Jesuits on the Santiago. He wrote to his Portuguese Provincial informing him of the sad event. When the seas were free of corsairs the other two ships left Funchal for Brazil. After some weeks crossing the Atlantic, while they were still nowhere near Brazil, they were caught in a terrible storm. Although their ships survived the gale they were many miles off course and sought haven in a small port of Santiago in Cuba while the other ship led by Fr Castro was blown towards Santo Domingo. Fr Dias had to abandon his ship and he and his passengers and crew made the long trek over the island to Havana where in late July/early August, 1571, they secured passage returning to Europe. When they arrived in Angra, in the Azores, they found that Fr Castro and his missionary companions had arrived there earlier.

As the governor and Fr Dias were not prepared to cave in to adversity, they immediately set sail for Brazil a second time after Fr Dias had ensured that his companions who had fallen sick had been sent home to Portugal. So together with thirteen of his Jesuit companions they set out on the outfitted ship for Brazil on September 6, 1571. After six days at sea, they met five pirate ships in the vicinity of the Canary Islands. Four were French under the command of Jean Capdeville, a French Huguenot who was in the crew which massacred Fr Azevedo and his companions, while the other was an English marauder. The governor’s crew boldly faced the enemy and with a salvo, brought down the mast of the Huguenot’s vessel and killed twenty men. However, Dom Luis’ ship was surrounded and they were outnumbered five against one. Although they fought valiantly, he and his men soon fell victims to the corsairs. Fr Dias, Fr Castro and some scholastics went among the wounded to bandage their wounds and carried them to safety. The ships were soon overrun with pirates brandishing swords.

They quickly picked out the black cassocks of the Jesuits; they hacked Fr Castro to pieces and then dealt countless blows to Fr Dias. With the two priests, a scholastic and two novices were killed that day, September 13, 1571.

The remaining nine Jesuits were kept below deck until the next day and then in groups of three, brought up, subjected to torture and indignity and then thrown alive into the sea. Of the nine, seven drowned.

The two scholastics, Sebastian Lopes and James Fernandes, both strong swimmers, stayed afloat and were eventually rescued by one of the pirate ships. They were given freedom and taken back to France.

They later made their way to Portugal, where they narrated their sad story.

The 11 companions of Fr Peter Dias were:

Scholastic John Alvares, Portuguese, native of Estreito, born about 1545, entered the Society on Nov 1, 1564; thrown alive into sea on Sep 14.

Scholastic Gaspar Goes, Portuguese, native of Portel, born about 1546; killed and body thrown into the sea on Sep 13.