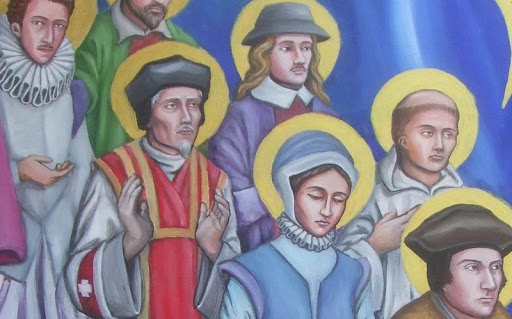 Thomas Cottam was born in Lancashire, England, of Protestant parents and raised in the Established Church. After graduating from Brasenose College, Oxford with his bachelor’s degree, he took up a schoolmaster’s position in London. There he befriended Thomas Pound, an ardent Catholic and through the latter’s influence, Thomas converted to Catholicism in 1575. As Thomas grew in his faith, Pound further encouraged him to join the priesthood. Thus in May 1577, when he was about 28 years old, Thomas left his teaching job for Flanders in the Continent to join the English College in Douai. As he desired a stricter way of life, he thought of becoming a Jesuit and so after he was ordained deacon in 1579, he left for Rome and entered the novitiate of Sant’ Andrea on April 8, 1579. Since he did not expect to ever return to England as the Jesuits had no mission there, he requested to serve as a missionary in India. However, soon after, he became ill with a lingering malady due to the Roman climate. He was advised to return north to recover. He left for Lyons but his health became worse.

While at the French city, Thomas met Sledd, an Englishman in the service of his government whose despicable job was to sniff out English priests before they returned home. Pretending to be a fervent practicing Catholic, Sledd took advantage of Thomas’ friendship and found out that he was looking forward to ordination and returning to England to work among persecuted Catholics. Sledd gave his superior in Paris a detailed description of Thomas and the date he would be crossing the Channel for England. After his ordination at Poisson, France on May 28, 1580, Fr Cottam and his companions set out for England on June 5 and when they arrived on June 16, Dover port authorities were waiting for him and he was immediately arrested. A lawyer, Humphrey Ely, a Catholic and a law professor at the University of Douai, was ordered to deliver him to Lord Cobham, a London magistrate. Ely revealed his Catholic identity to Fr Cottam and told him that he had no intention of handing him over to the Queen’s men and that they would part way once they arrived in London. Initially Fr Cottam thought of turning himself in but was dissuaded to do so by friends. However when he heard that Ely was under investigation for failing to deliver the priest to the magistrate, Fr Cottam voluntarily surrendered himself to save Ely.

Fr Cottam was charged for being a Catholic priest and when he would not change his religion even to save his life, he was imprisoned first at Marshalsea Prison in London and later at the Tower, where he underwent fierce torture. On Nov 20, 1581, together with Fr Edmund Campion, he was condemned for high treason and sentenced to be hanged, drawn and quartered. As there were now Jesuits in England, Fr Cottam wrote to his mission’s superior and was granted remittance into the Society’s English mission. His execution, six months after Fr Campion’s, was carried out on May 30, 1582 together with three diocesan priests. He witnessed the deaths of the three priests and prayed to each to pray for him. When officials attempted to induce him to ask for the Queen’s mercy, he retorted: “I will not swerve a jot from my faith for anything, yea, if I had ten thousand lives, I would rather lose them all than forsake the Catholic faith in any point.” 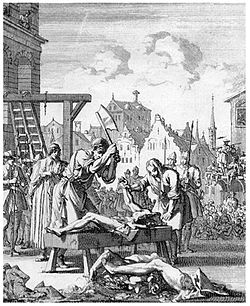 Just before he was hanged, Fr Cottam asked the Catholics present to pray with him, and aloud he said the Our Father and half way through the Hail Mary the executioner pulled the cart from him and his body was cut down and quartered. To prevent the crowd from taking relics, the bodies of all four martyrs were cast into vats of boiling water.

Fr Thomas Cottam, a martyr of England was beatified by Pope Leo XIII on December 9, 1886