Peter Wright was born in Slipton, Northamptonshire, England of poor parents with twelve children. Peter was still young when his father died and he had to work for a local lawyer in Thrapton to help support his large family. As he was in constant contact with Protestants who visited the law office and through frequent religious discussions, Peter lost his faith in Catholicism. Ten years later he left the lawyer and imprudently enlisted with the English forces in the Low Countries. After a month he deserted and went to Brabant as he did not like the loose military life. He thought of making a pilgrimage to Rome. He visited the English Jesuits in Liege and asked to be reconciled to the Catholic Church. After visiting Ghent and attending the college operated by Flemish Jesuits, he joined the novitiate in 1629. After finishing his theological studies at Liege he was ordained there in 1639 and looked forward to serving in a foreign mission. However his superiors sent him to serve at the English College in Saint-Omer, Flanders before he became chaplain to the English soldiers serving with the Spanish army in Flanders during the Civil War.

Fr Wright was attached to Sir Henry Gage’s regiment and later, after the latter was killed, served as chaplain to the Marquis of Winchester, first in Hampshire and later in London. On Feb 2, 1651, priest-hunters were patiently waiting for Fr Wright to begin Mass at the Marquis’ residence as it was Candlemas Day. They rushed in just as Mass was about to begin to surprise the priest but the Marquis stopped them on the stairs, hoping to give Fr Wright sufficient time to escape. Fr Wright was about to begin Mass but when he heard the commotion, he removed his vestments and escaped through the window and hid in the roof top. Unfortunately they eventually found him and was taken to Newgate Prison. However the trial was postponed till the prosecution could find a special witness capable of identifying the prisoner as a priest. They found one, Thomas Gage, an apostate Dominican friar and the brother of Sir Henry Gage who knew him from the time Fr Wright was the chaplain with his brother’s regiment in Flanders. 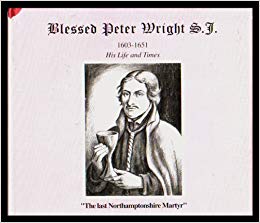 Upon Thomas Gage’s testimony that Fr Wright was a priest and had been responsible for converting many Protestants to the Catholic faith, the latter was found guilty and sentenced to death by hanging to which he exclaimed: “God Almighty’s holy name be blessed now and forevermore!” The Spanish ambassador tried to save his life but his efforts failed. Fr Wright spent his last night in quiet prayer and celebrated his last Mass at five o’clock the next morning. When he heard the jailer’s knock on his door, he answered: “I come, sweet Jesus, I come.” He bade farewell to the other prisoners and allowed himself to be bound to the hurdle that dragged him to Tyburn where a crowd of 20,000 was waiting to see a martyr go to God. That day thirteen criminals were to die and while they were being hanged, Fr Wright silently prayed. When his turn came, he spoke to the crowd: “Gentlemen, this is a short passage to eternity….. I was charged with no other crime but being a priest. I willingly confessed I am a priest; a Catholic, I confess I am a religious man of the Society of Jesus……..this is the cause for which I die….for this cause of propagating the Catholic faith, I most willingly sacrifice my life, and would die a thousand times for the same, if it were necessary.” After asking the crowd to join him in prayer for him, he concluded with, “when I shall come to heaven I will do as much for you.” After he was hanged until dead, they cut him down, and beheaded, disemboweled and quartered him. His friends were allowed to take his body away and later it was taken to the Jesuit college in Liege where it was buried.

Fr Peter Wright was forty-eight years old and spent twenty-five years as a Jesuit. He was beatified by Pope Pius XI on December 15, 1929 as a martyr of England.