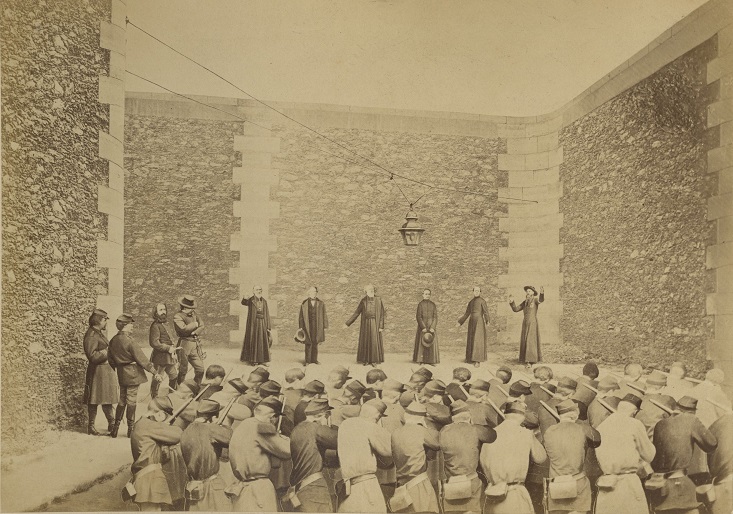 Leo Ducoudray was born in Laval, France. He studied at the minor seminary in Paris and then completed his studies at the College of Chateau-Gontier. After his law degree, he entered the Society of Jesus at Angers on October 2, 1852 and after he had pronounced his vows two years later, he did three years of philosophy at Laval and became assistant to the prefect of studies at St Genevieve, a military school in Paris. In 1861 he went to Lyons for theology and it was there that he was ordained in 1864. After his tertianship he was appointed rector of St Genevieve and it was here that he was arrested together with Fr Clerc on 4 April 1871.

Alexis Clerc was born in Paris. As his parents were indifferent about his early religious upbringing, he studied at the College of Henry IV and the Royal School of Paris. At fourteen he became a cadet and served in the navy for thirteen years and through associating with several sailors who were Catholics, Alexis returned to his faith in 1847 and developed a deep spiritual life. In 1850 after completing a retreat under the direction of the famous Jesuit preacher Fr Gustave de Ravignan, he was certain of joining the Jesuits, but his director urged him to wait. Alexis thus continued in the navy and went to sea. Within four years, Alexis was promoted to Lieutenant with command of his own vessel. While in Paris, Alexis made another retreat with Fr Ravignan, this time in the novitiate, and came to the decision to enter religious life. He left his commission and entered the Jesuit novitiate at Saint-Acheul on August 28, 1854 at the age of thirty-five. After taking his simple vows on September 8, 1856 he went to the College of Vaugirard in Paris for philosophy and did some prefecting. In 1861 Alexis was assigned to teach mathematics at St Genevieve and there he met his future companion in martyrdom, Leo Ducoudray. In 1861 he went to Laval for theology and later returned to St Genevieve after his ordination. Whilst making his tertianship at Laon in 1870, France declared war on Prussia and Fr Clerc went to Vaugirard to minister to the wounded and the dying. He returned to St Genevieve in 1871. 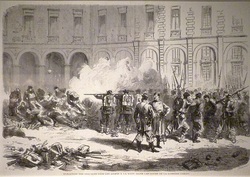 With Paris under siege by the Germans for a long time, the socialist-minded anti-Catholic revolutionaries took command of the city when the government moved to Versailles and established a commune which restricted the activity of the clergy. Shortly after this they announced the confiscation of properties owned by the religious community. Fr Ducoudray foresaw that this would happen and had already relocated the students and Jesuit community outside Paris in the school’s villa at Athis. He intended to join them but a member of his community unexpectedly died on the morning of April 3; so he postponed his departure as the Jesuit community from Athis was returning to Paris for the funeral. Between midnight of the 3 rd and 1.00 am of the 4 th, the school was surrounded by armed communards who were banging on the residence door and soon arrested Fr Ducoudray and seven other priests. Among them were Frs Clerc and Anatole de Bengy, four brothers and seven house servants. Fr Ducoudray was totally isolated from the others in prison and to his surprise his request for Fr Clerc to be his cellmate was granted. The two together with Fr de Bengy were later moved to the Mazas prison. There on April 13, two more Jesuits were added but the other nine Jesuits and seven servants were released.

The hostages were moved to the La Roquette prison which meant that death was imminent and the priests prepared themselves by going to confession. Words came that sixty of the hostages were to be put to death at 6.oo pm on May 4 but this was soon changed to six. At 8.00 pm that night the names of the six to die were read out. These included Fr George Darboy, the archbishop of Paris, Frs Ducoudray and Clerc, two diocesan priests and a city magistrate. They were marched outside the prison and placed against the wall. Fr Clerc, to show his eagerness for martyrdom opened the top of his cassock and bared his breast to the firing squad while Fr Ducoudray held his hand on his breast pointing where to hit. All six hostages gave their lives for God. Their bodies were later taken to the nearby cemetery and buried without coffins in an open trench. After the commune fell on May 27, 1871, the bodies of Frs. Ducoudray and Clerc were recovered and taken to the Jesuit church on Rue de Sevres. They were finally interred in the chapel of the martyrs.

The cause of Fr Leo Ducuodray and Fr Alexis Clerc and their three Jesuit brothers who died on May 26, 1871, was introduced in Rome on February 17, 1937.