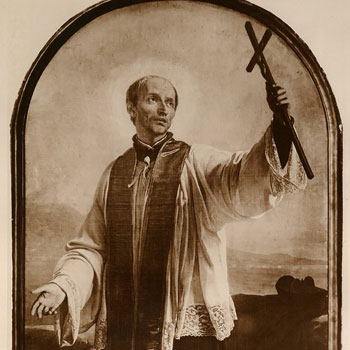 Francis Jerome, the first of eleven children in the De Geronimo family was born in 1642, in Grottaglie, near Taranto, in southern Italy. Around the age of ten he went to live with the Theatine Fathers where he served as sacristan in their church in return for his room and board. Francis often accompanied the Theatins as a catechist when they conducted missions in the neighbouring towns. At sixteen when he indicated his intention to be a priest, the Theatins recommended him to join the Jesuit school in Taranto to begin his classical and philosophical studies. He went to study civil and church law at the Jesuit college in Naples in 1665 and in the following year he was asked to act as prefect for the sons of the Italian nobility attending the school because of his exemplary conduct. He was ordained in 1666 and began supervising the noble youths.

As he had known the Jesuits for ten years, Fr Jerome was inclined to be one of them and thus in 1670, at the age of twenty-eight, he joined the Jesuit novitiate. After one year, he was sent to the diocese of Lecce to assist an experienced home missioner in giving retreats and missions where he stayed for the next three years. After he passed his final examination in theology in 1676, Fr Jerome was assigned to his “ Naples mission” and began a most fruitful apostolate that extended over the next forty years until his death.

Fr Jerome worked with the sodality of artisans who met in the chapel beneath the Gesu church. It was from this group that he chose assistants to help him in his apostolate in the city where every Sunday and holy-day evening, he preached in the city’s public squares or busy thoroughfares where the masses could easily gather. He was also credited with the promotion of monthly Communion. In addition, he also visited the slaves and criminals chained to their places when the fleet of galleys arrived at Naples Bay and would try to console and relieve their suffering in whatever way he could, including getting them to leave the ship and attend Mass in a nearby church.

Although Fr Jerome had great success in his ministry, he encountered suspicion and jealousy among some ecclesiastics who told the archbishop that they seriously doubted whether Fr Jerome who was occupied with street preaching and who was in constant contact with the worst kind of sinners, was suitable to give retreats to priests and nuns who were striving in virtue. These complaints led to the severe restriction of Fr Jerome’s ministry. The archbishop subsequently reinstated him when he learned that the complaints against Fr Jerome came from prejudiced and jealous individuals. Later his own Jesuit superior complained that Fr Jerome’s activities took him away from his Jesuit community functions and henceforth he would have to seek permission for any activity outside the Jesuit community which were rarely granted. In all these, the humble Fr Jerome never yielded to depression but viewed them as years of spiritual growth until the provincial admitted his error and Fr Jerome was again free to return to his Naples ministry.

From 1702 onwards, Fr Gerome was asked to carry his mission outside Naples which he did devoting six months each year within Naples and the other six months as an itinerant preacher outside Naples where his simple and earnest sermons were warmly accepted. Fr Jerome fell ill from pleurisy in his last days and succumbed to death on May 9, 1716, with his Jesuit brethren at the Gesu at his bedside to commend his soul to God. Fr Jerome died at seventy-four and had been a Jesuit for forty-six years.