Anthony Criminali, the very first martyr of the Society of Jesus, was born in Sissa, in the diocese of Parma, Italy. He received his early education from the local parish priest and later went to Parma to study for the priesthood and was ordained a subdeacon at the age of eighteen. He became acquainted with Fr Peter Favre when the latter came to Parma in 1539 to preach parish missions. He made the Spiritual Exercises for thirty days under Fr Favre’s direction. Anthony did not join the Society after the retreat although some of his friends did. In September 1541 he bade his parents farewell and dressed as a pilgrim, walked and begged his way to Rome. He arrived in Rome two months later and immediately went to see Fr Ignatius. He was too humble to ask to be admitted as a candidate when he spoke to the founder and instead merely requested to help the fathers by doing various household chores. Fr Ignatius gladly took him in as he perceived Anthony to be a young man ready to do God’s will.

Shortly after Anthony’s arrival in Rome, he learnt that his mother had died and that his father was deeply distressed and feared that he too would die from grieve. Fr Ignatius, sensitive to others problems and needs, suggested to Anthony to return home to comfort his father and at the same time assured Anthony that he would be accepted as a novice on his return. As it transpired Anthony’s visit to Sissa to see his father was not long because his father recovered from his depression. So Anthony returned to Rome on April 9, 1542 and was admitted to the Society. On April 23 he left for Portugal to complete his studies at the University of Coimbra and was ordained there on January 6, 1544. 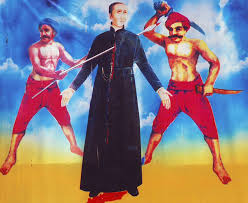 Fr Criminali was assigned to the mission in India. He and a companion embarked on April 22 but their ship was forced to return to port because of a violent storm. They finally secured another passage on March 29, 1545 and arrived in Goa, India on September 2. There he was assigned to work along the Fishery Coast, from Ramnad to Cape Comorin near Malabar, an area of about 130 miles long by the mission superior, Fr Francis Xavier. Although Fr Criminali was young, only twenty six years old, he was appointed mission superior. Throughout the three years in India he established stations and left a priest or a catechist in charge of each. Fr Criminali would make monthly visit to each station on foot, disregarding the heat, cold and rain. He was loved by all including non-Christians because of his gentle and amiable character. Fr Xavier in a letter to St Ignatius said this of Fr Criminal: “Anthony Criminali is at Cape Comorin, with six others of the Society. Indeed, he is a holy man, and seems to have been born to work in these lands. Men like him can achieve a good deal – I wish you would send us more of them; He is superior of those at Cape Comorin and is beloved by native Christians, pagans, and Moslems. But the love that Our Lord has for him is beyond telling.”

Contrary to the advice of Fr Criminali, the Portuguese governor had established a tollgate to collect fees from the Hindu pilgrims who crossed by boat to visit the sacred island of Rameswara, known for its famous temple which was a short distance from the Vedalai mission . This greatly inconvenienced the pilgrims who complained to their Brahman priests who in turn informed the Marava prince of Ramnad who contacted the Badaga, a fighting caste to attack the Portuguese settlement. The infuriated Hindus broke through the barrier. The Portuguese fled, leaving the small Christian village to absorb the furious Hindu hatred of Christianity. 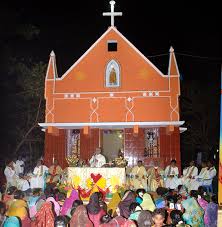 Fr Criminali saw one of the Badaga slay his catechist but soon he too was surrounded by them. As he could neither advance or retreat, Fr Criminali knelt down in their midst and raised his hands in prayer and waited for the blow to come. One of them jabbed him with a lance, while others ripped his cassocks off. When they left, Fr Criminali with blood streaming from his wound tried to make his way to the chapel to die but was soon surrounded by the Badaga again. This time one of them thrust a lance into his breast and as he struggled to the chapel a Badaga rode by and severed his head from his body and carried his head and cassock and placed them as an offering on their shrine’s altar.

Fr Criminali’s body was later buried hurriedly in a very shallow grave by the Christians who feared that the Badaga would return and subject the body to further indignities. Two days later they returned to bury it deeper, waiting for the day when they could place it in a fitting tomb. Sadly when the time came to transfer Fr Criminali’s body to the church, the Christians could not find the body despite all attempts. Either they had forgotten where the actual burial place was, or the strong monsoon winds could have lashed over the sandy beach changing the contours so drastically that the Christians could not recognize where the place was.

Fr Criminali was twenty nine years old at the time of his death and had been a Jesuit for seven years. His cause was initiated in 1901.