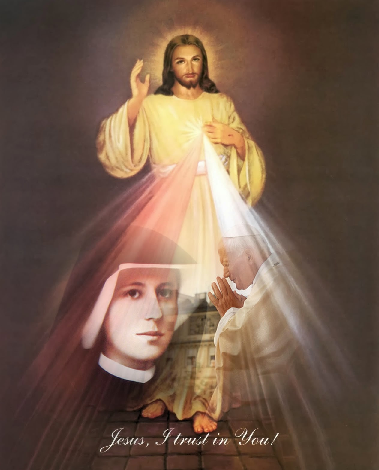 When Pope St John Paul II canonized Sr. Faustina Kowalska as a saint on 30th April 2000, he surprised the entire world by establishing Divine Mercy Sunday, a feast day which falls on the Second Sunday of Easter.  On that day, Pope John Paul II declared, “This is the happiest day of my life.”  Why is this so?

The world we lived in 19 years ago, and the world today continues to be challenged by the reality of the immense suffering of mankind that is caused by the sin of humanity’s rejection of God’s infinite Love.  It is important that we ask ourselves some fundamental questions today like: “Is there true peace, is there lasting justice, and is there real hope in the world, and in our homes and in our hearts?

If the answers to these fundamental questions are based on our human desires and dreams, the clear answer is NO!  Even as there are millions of good people who have promoted “true peace, lasting justice and real hope” through the witness of their lives, and very specially for people like Pope St John Paul II, St Faustina, St Mother Teresa, and even when they have died for such Gospel values like: St Maximillian Kolbe, sadly, humankind, since the time of Adam and Eve’s rejection of God’s Love, has continued to pervade the world and permeate human hearts.  And, the pattern and path of humankind is increasingly self-centered, self-serving and self-destructive.

My brothers and sisters in Christ, I believe there is a fundamental challenge that you and I are called to face.  First, you and I are sinners and all of humanity are in need of God’s Merciful Love and forgiveness.  Unless and until our hearts are humble enough to see and admit and repent of our sins, for the wrongs and the harm we have caused others; for the good we have fail to do; and for the rejecting of the many opportunities of God’s invitation to share our wealth, talents and blessings with others in need, regardless of who they are and how we have failed to be generous, and merciful, . . . our reflection on today’s celebration of Divine Mercy will not bring about the conversion of our hearts and the renewal of our faith, as God Wills of us.

I say this because in many ways, I have been “guilty” of not being merciful enough to those who are poor and needy who come to us for help; even though we are .  Yes, we can still very easily justify that they should only come once a month, and not come so often, or they should be less dependent on our Cathedral’s social mission financial support, and the like, and worse still we hear of prejudiced remarks about them, like they are lazy and would use the money we give them to drink and the like . . . 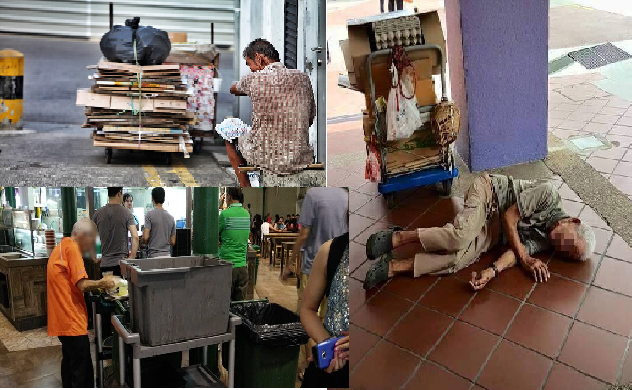 The list of our justifications and judgment on people in need whether financially or emotionally can be endless.  The bottom line of today’s Divine Mercy Sunday is that you and I are called to be more like Jesus, the Risen Lord of today’s Gospel, who has and continue to show His infinite Mercy on you and me, by forgiving our sins unconditionally, when He prayed to His Father before He died on the Cross, “Father, forgive them for they do not know what they are doing.”  Many of us are not fully aware that this forgiving Merciful Love of Jesus is not directed to the Jewish authorities, but also extended to us daily. . . .

If we are not fully aware of our need to witness to and show God’s Merciful Love to others in our daily living, then we could say that one of the main reasons of why we are behaving in such unmerciful and unChristlike manner is that we have been strongly influenced by what is happening in today’s secular world.

If we reflect more deeply on the secular world in which we are a part of, we can conclude that the world is promoting secular values that are distorting the Gospel values of Christ.  In the world of Internet technology, social media and Hollywood entertainment, medical and educational advancement and the like, let us ask ourselves, “Is the human person’s dignity and identity affirmed and promoted effectively, or is the reality of God’s existence pushed to the background of our lives where God becomes increasingly irrelevant and unimportant?

Also, do we not see that the secular values of materialism and consumerism are promoting a brand of “happiness” that very convincingly tell us that we need to make our millions as soon as possible, and often even at the price of sacrificing the quality of our family life.  In such secular world the “success” that is essentially promoted is actually a spirituality of superficiality and self-centred gratification instead of the Gospel spirituality of the Christ-centred sacrificial love, mercy and generosity. 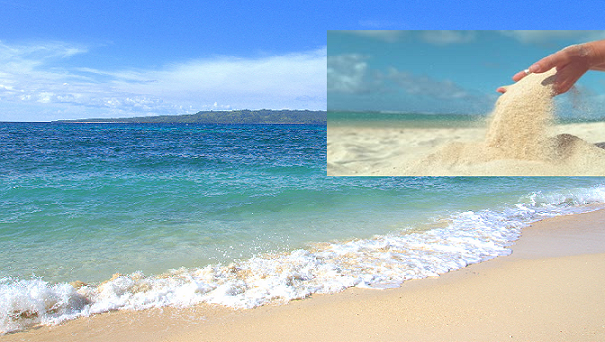 There is a story of a young woman, who led a sinful life.  She became thoroughly depressed and decided to commit suicide by jumping into the sea from a high rock on a sandy beach.  As she walked along the beach towards the rock, she felt that she should write her sins on the sand before ending her life.  As she started writing her major sins on the sand and stood up to read them, suddenly a strong wave washed the shore and erased all that she had written completely.  Seeing that all her written sins have been washed away, she suddenly became aware of and realized the power of God’s Mercy and Forgiving Love.  She then rushed to a church and confessed her sins.  From that day onwards, she started a new life of peace and hope in the Lord.

There is also a story of a young man who approached Archbishop Fulton. J. sheen and asked him how he could be sure that his sins would be forgiven by God after the Sacrament of confession and reconciliation. The Archbishop led him to a beach and asked him to collect a handful of sand. He then asked him to throw the sand into the sea.  Then he asked the young man if he could recover and gather back the grain of sand that he had just thrown into the sea?  The man immediately understood the power of God’s forgiveness. When God forgives our sins, he casts our sins into an ocean of mercy, kindness, forgiveness and forgetfulness.

My brothers and sister in Christ, let us remember the gift of Divine Mercy of God is always forgiving, and we are each called to open our minds and hearts to God’s abundant graces to become more like Jesus today.

Reflecting on the immensity of the sins and the evil in the world that continues to reject God’s Merciful Love, Sr Faustina wrote in her Diary:  “I feel tremendous pain when I see the sufferings of my neighbours. All my neighbours’ sufferings reverberate in my own heart; I carry their anguish in my heart in such a way that it even physically destroys me. I would like all their sorrows to fall upon me, in order to relieve my neighbour” when it takes the love of God as its measure!

My brothers and sisters in Christ, it is such selfless and sacrificial merciful love of Christ that you and I are invited today, on Divine Mercy Sunday to embrace and renew in our hearts, so that our Church and our secular world, can experience greater hopes through our conversion and renewal of faith. 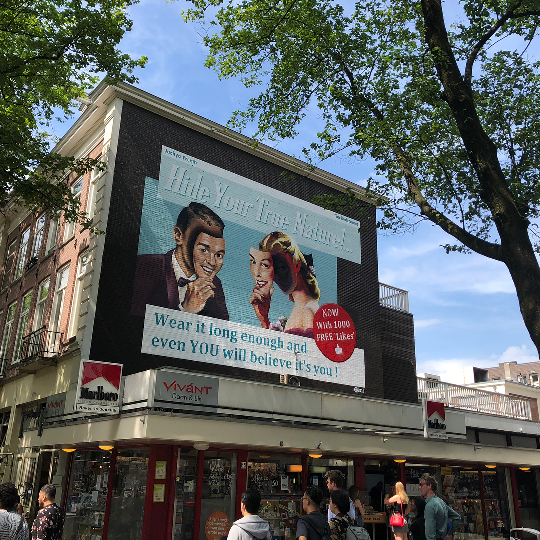 Unless, we are committed to living the Christ-like Merciful Love daily, many of us may likely continue to allow our secular world to feed us with the “fake news” that happiness, success and fulfilment in our lives can be achieved without God!  A Godless society and lifestyle can only bring division in families, disappointment in expectations, and eventually the destruction of the human race; and the precious and beautiful creation of God in nature, through human greed, pride and self-glorification.

The sufferings of humanity is worldwide and comes in many forms: the evils of the world through the killing of innocent lives through abortion, scientific testings; the exploitation of human lives of many migrant workers treated as modern slaves are not uncommon; the global exploitation of the poor and needy; the inequality and injustice in the great contrasts between rich and poor where 20% of the population owns 70% of the wealth, while the rest of the 80% of the population share the remaining 30% is not uncommon in many countries in the world.

For true peace, lasting justice and real hope to return to our world, our families, our hearts and homes, Pope St John Paul II asserts that, “As the Apostles once did, today too, humanity must welcome the Risen Christ into our hearts and home, more fully, more sincerely and more wholeheartedly.  For the Risen Lord is giving us the gift of the Spirit of “Peace” who heals the wounds of the heart, pulls down the barriers that separate us from God and divide us from one another, and at the same time, restores the joy of the Father’s love and of fraternal unity.

Nevertheless, Pope St John Paul II adds that, “It is not easy to love with a deep love, which demands that we give ourselves to others authentically.  To this he adds that this deep love can only be learned by penetrating the mystery of God’s love.”  He explains further that it is only when we are able to look and contemplate on God our Father’s Love and unite and be one with His Fatherly Heart, that we are then “be able to look at our brothers and sisters with new eyes, and then develop an attitude of unselfishness and solidarity, and generosity and forgiveness.  And all of this is what Jesus has shown us and what God’s mercy is about!

In short, and as I conclude, let us remind ourselves that, if we truly desire to receive the abundant graces of the Divine Mercy of our Lord, then let us be reminded that as the apostles in today’s Gospel were hiding behind closed door, for fear of being arrested and executed by the Jewish authorities, we too can easily and unknowingly find ourselves hiding from the truth of God’s Merciful Love that is challenging us to break free from the fears of our sinfulness and the many prejudices and guilt of our lives.

Let us then pray that in receiving and recognising God’s infinite Mercy we are each call also to be merciful and forgiving to our loved ones and show and witness Jesus’ Merciful Love to all peoples in our daily living.