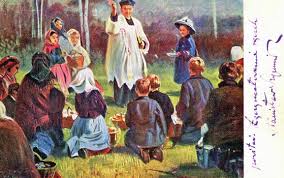 Adalbert Mary Baudiss was born in the town of Bojany na Bukowinie, in Lwow. As a youth he studied at the Jesuit school in Lwow, and served Mass at the Jesuit church of Sts Peter and Paul, where he befriended the sacristan brother. In their conversations they often talked about religious matters and at times read from spiritual books, recited the rosary, or prayed before the Blessed Sacrament. In later years, Fr Baudiss remembered this kind and humble brother and acknowledged that it was he who had first taught him how to pray. Also, through this association that Adalbert began to think about joining the Society which he did when he was just fourteen-and-a-half years old. As the Polish Jesuits of Galicia did not have their own novitiate at that time, Adalbert was sent to the Austrian province’s Novitiate at Baumgartenberg, near Linz on September 12, 1856. His older brother, Clement, joined him at the novitiate a year later.

In 1858 Adalbert’s province opened its own novitiate and scholasticate at Stara Wies, and the Polish novices at Baumgartenberg returned home. As Adalbert was not yet seventeen when he finished his two years of novitiate, he had to wait until the spring of 1859 to pronounce his three religious vows.

He stayed on in Stara Wies to study the classics, and began his philosophy in 1861. In 1864 he was sent to the Jesuit school at Ternopol where he helped prefect students, assisted the librarian, and taught French. In 1867 he added History, Greek, and Latin to his teaching schedule. He went to Cracow in 1869 for his theological studies and was ordained to the priesthood on September 10, 1871 in the historic Wawel cathedral. He completed his tertianship, the final stage of his Jesuit training in 1873, when he was thirty-one years old.

For the next eleven years, Fr Baudiss worked at the scholasticate in Stara Weis in various jobs ranging from teaching and hearing examinations, as spiritual director for the young Jesuits, gave recollections and retreats and was also assistant to the master of novices. In 1878 he became novice master, one of the more important positions among Jesuits as the job involves the formation of novices on the fundamentals of religious life and to guide them in prayer. Fr Baudiss fulfilled this office for six years when he was called to another important work, a task totally unexpected and delicate.

In Galicia there were fourteen Greek Catholic monasteries of St Basil, but only sixty-one monks. And, for years, they had no novices and it appeared that the congregation would soon become extinct. Most of the monks were far advanced in age and for some time they had been living under relaxed rules. In some cases they lived in extreme poverty. The archbishop of Lwow made a canonical visitation of the monasteries and was deeply distressed by the sad plight in which he found the Basilians. Not knowing what to do, he turned to the Holy See. Pope Leo XIII studied the problem and agreed that the Basilian congregation had to be reorganized. He turned to the Polish Jesuits in Galicia for advice and help as the Provincial of the Basilians was himself elderly, in poor health and lacked the physical energy to carry out a radical renewal. Fr Baudiss was chosen to assist the Basilians in their congregation’s renewal.

Fr Baudiss recognized that this was a difficult assignment but accepted it in obedience to the Pope. As the Pope had decided that the reorganized congregation was to be at the Dobromil monastery, Fr Baudiss was sent there in 1884 as assistant rector and assistant master of novices. His appointment inevitably resulted in some friction but it was not the result of what Fr Baudiss did. The very fact that Fr Baudiss, a Polish Roman Catholic was being asked to reform Ukrainians Greek Catholics to revive a congregation totally different from his, was viewed as the product of “Jesuit intrigue”. Fr Baudiss had to assure them that he was not interested in polonising the Ukrainians, but his concern was to revive their congregation and renew them in their spiritual life. He respected their Greek Catholic customs and traditions, learned Ukrainian so that he could give conferences to the monks, and thoroughly mastered their religious rule to better lead them. In a few years, the Basilain congregation began to live again.

In 1889, Fr Baudiss was made superior of the monastery in Lawrow, but in 1892 he returned to Dobromil to teach German and History. In the following year he became superior of the community and prefect of studies, and in 1896 novice master. After seventeen years working among the Basilians, their common efforts in renewal bore great fruit: there were 67 priests, 40 scholastics, and 70 brothers, a total of 177. Fr Baudiss was so greatly loved by the Basilians that they asked him to serve as Provincial of their congregation, but in humility he declined. Now that the congregation comprised of a new generation and brought up in their true spirit, it was time for them to proceed on their own and in 1902, Fr Baudiss left Dobromil for the Jesuit school at Chirov.

In 1905 Fr Baudiss was sent to Iasi in the Moldavian portion of Romania to be rector of the diocesan seminary, and with his usual prudence successfully smoothed out the difficulty that existed between the local bishop and the Society. With that task accomplished, he was made Provincial of Galicia in 1906, and when his term was completed, he became instructor of tertians at Tarnopol and later returned to Chirov at the start of World War 1. In 1915, at seventy-five years of age, Fr Baudiss was once again at Stara Weis, and remained there until his death. He was spiritual father of the Jesuits there and chaplain to a nearby convent of nuns.

One morning in the spring of 1923, as the eighty-one year old Fr Baudiss got out of bed, he felt dizzy and fell, injuring his hip. He was able to move about after he recovered through patient convalescence. In time his loss of hearing prevented him from hearing confessions. Then his legs gave way and he was unable to go to the sisters for Mass. Eventually he had to give up saying Mass and was confined to bed. On April 25, 1926, Fr Baudiss surrendered his soul to Jesus, his one and only love. He was eighty-four years old and had been a Jesuit for seventy years. The cause of Fr Adalbert is now under consideration by Rome.